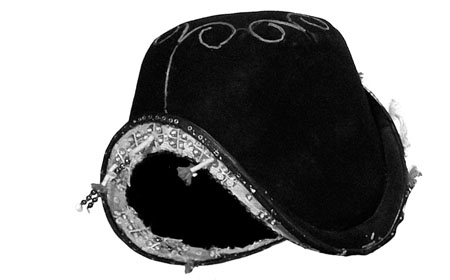 Calico | is a fabric finished from unbleached processed plain-woven cotton, which is cheap though made with bright colours and understated fl oral or abstract patterns by the traditional weavers of the city of Calicut, Kerala. They were so popular that the English prohibited their importation in a series of Calico Acts (1690—1721) to protect the home market. The calico question was one of the major issues of National politics between the 1690s and the 1720s. Dissatisfi ed with the smuggling of outside textiles after the original Act, Parliament passed a stricter addition, prohibiting the sale of most cottons, imported and domestic, and promoting the sale of wool.

The “calico crisis” depicted Indian textiles as a national threat not just to English trade but to gender roles. It contributed to a national debate about luxury, with women consumers of calico reproached in pamphlets which went on to attack working women who defied the “decorum of consumption“. In pamphlets and tracts in support of the wool trade, authors such as Daniel Defoe accused female domestic servants, who were subject to fewer sartorial constraints than their liveried male colleagues, of ruining England’s wool industry and of causing widespread unemployment among male weavers.

It is claimed that in Luis XIV´s France 16,000 persons lost their lives through the enforcement of calico decrees, primarily through execution. On one occasion in Valence 77 people were sentenced to hang, 58 to be broken on the wheel. In Georgian England contravention of the Calico Act was punishable by fi nes on both weaver and seller.

When British manufacturers had worked out how to colour print cotton themselves, they changed their tune, but then had a new complaint. In 1782 they petitioned parliament that the East India Company had taken advantage of the “improvements introduced by them some years ago in printing on engraved metal and copper plates. By sending out plates and workmen to their Indian settlements where the price of labour is cheaper the pertitioners are in danger of being ruined…provisions were made eagainst the seducing of workmen or the exportation of tools employed in their manufactures.”

0208 | One of the greatest scandals in the early 19th century of Lima was the arrest of Francisco Pro, a 20 year-old mulatto tailor. Pro was walking along the Alameda de los Descalzos one winter afternoon on 2 August 1803, dressed as a woman, with his head covered. Back in those days it was not unusual to see women “tapadas” (with their head covered), nor for them to cover their faces as well. That day, Pro uncovered himself and revealed his identity. He was arrested and brought to trial, charged with sodomy. He was sentenced to a “public shame walk” in order to teach him a lesson and to make an example of him. The court argued that he was a pervert and a sodomite, and besides he had the “strange” profession in a man of tailoring. He was also sentenced to two months of forced labour, of which he ended up serving six, because of the sluggishness of the courts. After the six months nothing else was known of him. His name does not appear in any other document. Maybe the authorities made him disappear, but it can be presumed that during his whole life he suffered public shame and condemnation, and that he was always considered a delinquent. The gay movement “Azúcar Rosales” decided to reclaim the signifi cance of this historical fi gure on the day celebrating “Gay Pride”.

“There is no place on earth where women are so free and exercise so much power as in Lima. Their costume is unique. Lima is the only city in the world where it has ever appeared. The manto is always black. It completely covers the bust and most of the head, leaving only one eye uncovered. Oh! How enchanting they are, as fi rst they draw their manto right over their face, than slyly draw it aside! I can say without fear of contradiction that if a lovely form and a magnetic glance were suffi cient to ensure women the supremacy they are destined to possess, the women of Lima in their sayas would be proclaimed queens of earth. So these ladies go out alone to the theatre, to bullfi ghts, to public gatherings, to balls, to churches and to pay visits; and they are accepted everywhere they go. If they wish to speak to anybody they do so, then take their leave, so that they remain free and independent. When the women of Lima want to make their disguise even more complete, they put on an old bodice, an old manto, and an old saya, which is falling into rags and losing its pleats; this is known as disfrazar. A disfrazada is looked upon as eminently respectable, so nobody ever accosts her; and it would be improper and even dishonourable to follow her. It is supposed, and rightly, that if she has disguised herself it is because she has important reasons to do so. Freedom of action characterises everything she does.”

“Yes, I was angry about illegal trafficking in weavings, I’m a Bolivian, and that’s how I got involved in Coroma and recovering them. What a battle that was. Because the weavings have sacred value. It’s difficult to explain but they are a bridge between the people, the actual people, the members of the ayllus and the old ones, the first ancestors. It’s how to stay in touch with them in the rituals, with the people that were living like 500 years ago and it´s then that these old ones tell the people what they are supposed to be, keep alive in them the sacred geography of Coroma. People ask, how is it then, how can memories, even the name of an ancestor be stored in a weaving, but that’s how it is, an oral tradition. It’s not like honouring the ancestors, no, it’s how in certain ceremonies, in rituals they talk to the weavings. And in to this came the dealers, and the dealers they don’t understand this, they just think, Oh this piece is beautiful or that piece is beautiful, what they think is beautiful. What they did was to wait till there was a festival, like for the All Saints festival when the weavings are taken out of their q’epis, their bundles, and displayed in the festival, and then they took pictures and then sent Bolivian middlemen to Coroma with the pictures…and money. Of course with money. The people there are very poor, and the middlemen kept coming back but the money they got, those that did sell, they didn’t use it well. Like they kept fifty dollars and got drunk, and you know, bought themselves a radio, and all the time thinking fifty dollars was going to change their lives. And what happened was that people that sold the weavings, some of them are blind, commited suicide, they lost their animals. It’s not a coincidence, it really happened. But something else happened, which is how we have got many of the weavings back where they belong, those pictures they took, the dealers, they used Polaroid photos, you remember them, and some they threw away, and the people they picked them up, and that’s how we knew, how we could prove that these weavings, that were in the USA and Canada, that the dealers had sold there, belonged to the community. And we had to prove this, that they were stolen, because they were common property of the ayllu and no one has the right to sell them without permission because it belongs to all of them. That’s how it is in Coroma, in Charazani it’s different. The rituals are strong there too but the weavings aren’t common property. But for Coroma, we got a clue from John Murra in San Francisco who’d seen a postcard with a Coroma weaving on it, and then we got support too from some people in those countries who knew it was wrong and they gave us support, and most of all it was other Indigenous people. Like one day, somebody was knocking at the door, and I opened and there were two Indigenous men from Canada to support Coroma because they are having to fight for their culture. And of course there are changes with the government making a stronger law and the UNESCO Cultural Property Convention, which is good, but what we had to do was to give it legal force, to enforce the Convention that these weavings are sacred. It’s the first time in law history that the government recognises different values of the weavings. That’s how all these things, that’s how we got 48 pieces back from the USA and more from Canada in 2002. But it was a big fight. When I was in the USA with an elder from Coroma out of the 1000 pieces the US Customs had confiscated from a dealer, we had recovered only 23 from Coroma and were ready to return to Bolivia. Only that night I had a dream with a black cloth in my arm, a dog, and the ancestors dressed in old clothes and agitated and I just knew we must look again. So I phoned the Customs and the lady she rang me back and said it was true that there was one box we hadn’t seen. We went and she opened the box and there were another 25 weavings from Coroma. And then we had another big fight when they said that the weavings shouldn’t go back to the ayllus, that the people would just sell them again. First the big museums they think they should have them. Then the authority, the main traditional authority they think they must control them, not the Coroma people. They think only of museums. So they build a museum there, but the people didn’t want to put their ancestors there because it was like a jail. So the museum is built, and its empty. Either the people must be able to live in the museum, to make rituals there, to look after them. And if they can’t have that then the museum should only be for pictures of the weavings. The people planning the museum they have no conception, all they talked of was a cafeteria and parking for cars. And we kept saying no, because it’s not going to work like this. But what’s good is that other communities they have been inspired by what we did at Coroma.”