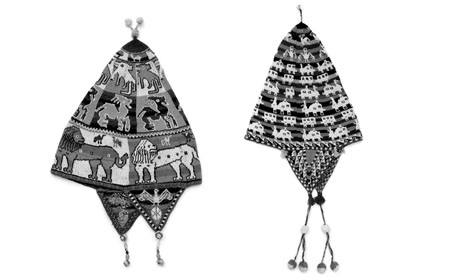 Dye Spy | Dye chemistry was the foundation of the development of the chemical industry as a whole; pharmaceuticals, fibres and plastics, it’s that important. Not surprising then, that it should have been a prime site of espionage, just as it had been for pre-industrial cochineal. Early in the 20th century it was dominated by German companies like Bayer and BASF using coal-tar in synthesizing indigo and sulfur black dyes. At this time the USA was playing catch-up mostly with the aid of German chemists, and including Bayer having its own production facility on the Hudson river, though it kept a tight grip on its patents. This did not prevent a ‘dye famine’ at the start of World War I with German dye factories switching to explosives, and a British naval blockade. The price of sulfur black, so important to hard-wearing fabrics like denim, rose by over 15 times in the one year 1914—1915. When the USA entered the war itself in 1917, its ‘anti-German spy’ campaign focused on the dye-chemical industry and took three forms: German chemists like Louis Hihn were arrested, charged with stealing samples and formulae; others were interned; and companies with German ownership were seized by the Alien Property Custodian. This distinctive tactic of opportunism and the pre-emptive strike included seizing all the US assets of Bayer itself including its patents. The patents however were ‘too vague’ to be useful, and Du Pont, which had entered the dye business could not get around sulfur black production problems, and so after the war they entered the espionage business themselves. The German government had prohibited the issuance of passports to chemists, but in 1921 Du Pont offered huge sums of money to four Bayer chemists in Leverkusen to defect. The usual false bottom trunks were involved but discovered, and it took US diplomatic pressure and Du Pont masquerading to finally get the men out and lay the foundations for the company’s leading position in the US dye industry. Soon after this however, the dynamics of international capital asserted themselves in the face of post-war depression, and the US company which had most benefitted from the Bayer seizure in 1917 —Grasselli—, negotiated a collaboration with Bayer in Germany in 1924. This was just before Bayer joined with BASF and Hoechst to form the near monopoly IG Farben. The conglomerate, notorious from its pro-active collusion with the Nazi regime, in the meanwhile became—through the Grasselli link-up—a major player in the US chemical industry operating as the General Aniline company, while keeping its patented knowledge under tight German control.

It didn’t prevent further attempts to gain German technical secrets by the USA, then the British and the French. In 1927 Guido Meisel was convicted and imprisoned for a year when trying to recruit chemists for a small rival to General Aniline, American Portsmouth Dye company, as were the two chemists he was recruiting. In the same year three Hoechst employees with an advance high-paid contract promised, were caught carrying trade secrets to England in their socks. In 1928 a ‘well-organized’ spy ring for the French was discovered in Leverkusen.

A very different picture of the Weimar Republic from the popular image of decadence and disorganization emerges, for in each case the ‘spies’ came up against the even better organized IG Farben intelligence department which placed agents in all of its plants. At the outbreak of World War II, the IG Farben-controlled General Aniline and Du Pont were the dominant producers of dyes in the USA. Despite the depression, production of dyes was at record levels in 1936. But as soon as the USA joined the war in December 1941, secret service agents moved into General Aniline’s offices and plants, and its German-born executives removed.

Two months later, just as in 1917, the government formally seized all its assets. This was at the same time IG Farben was producing Zyklon B poison gas for concentration camps and the methanol with which to burn the corpses. Following Americanization, General Aniline became the main producer of vat dyes for military uniforms. After the war the dynamics both of national interest, and capital as international, were at work. While Chancellor Adenauer complained bitterly that the American grab of IG Farben patents gave it a ten year lead in the chemical industry, executives of the conglomerate including those indicted at the Nuremberg trials, even when they had served short prison terms, were soon again running the banking-industrial complex of Germany. The conglomerate itself was simply broken back up into its component parts of Bayer, BASF, Hoechst and Agfa, which carried on in the chemicals business.

1794 | At the same time as the revolt of Haitian slaves against French plantation colonialism is underway, Eli Whitney invents the cotton gin in the USA. One consequence of the Haitian uprising was to amplify the huge increase in slave numbers in the American South that cotton production depended on, and that the gin invention, which sped-up cotton processing, made profitable and therefore, widespread. Another consequence was the USA slave revolts they inspired. The slaves in Haiti (then San Domingue) were used in the business of both indigo and cotton as well as coffee. Taking their cue from the rhetoric of the French Revolution the former slaves finally formed an independent state in 1804. In the process they fought off Napoleon’s attempt to retake the island. This in turn prompted him to sell Louisiana to the USA and thereby dramatically increased the land space suitable for cotton there. All this took place at a time when slavery itself was a dying institution in the USA because of the decline of tobacco and indigo as cash crops. Whitney’s gin transformed the situation. It increased the capacity of cleaning the cotton bolls by some 50 times so that slaves—as sewers, pickers and carriers—became a profitable proposition again. Between 1794 and 1860 some 1 million slaves born in the East of the USA, Virginia or Maryland, were sold to cotton plantations in Mississippi, Louisiana and Alabama in the USA. This internal displacement took place while slave importation was banned in 1808 because plantation owners feared that it might incite slave revolts.

A major centre of the slave trade existed close to the White House in Washington, which had itself been built by slave labour; price negotiations were conducted at slave ‘pens’. The intensity of labour promoted by free use of the whip when quotas were not met, meant that the ban on fresh slave importation did not in fact prevent uprisings like that lead by Charles Deslands in Louisiana. Then in 1816 the Seminole Wars were fought against an alliance of escaped slaves and Native Americans who’d made it to Spanish Florida. The later Vesey ‘conspiracy’ in 1822 and then Nat Turner’s revolt in 1831 in which some of the hated Whites were killed resulted in mass executions of slaves. They, like the Gabriel ‘conspiracy’ of 1800, were all inspired by what had been achieved in Haiti.

Ines, the Malays have an unspoken taboo about animal depictions upon the fabric of their apparel, especially ever since Islam became their Ad-Din (Fatih). The cloth that was once ‘owned’, emits a smell that was faint but intense. A smell of another realm. The smell of a distance soul. Animals are taboo for the body. Ancient people say that one’s head must never come face to face with that which depicts animals. Animals with fangs are also believed to be humans and ghouls that transform into wild beast. Your cloth function to cover the fontanel; A place of high distinction, not to be stepped on. Your colorful cloth is like a heart that is light and cheerful; yet the characters give out the opposite, and it gave me an eerie feeling. My hairs stood on end. This cloth has Life. To find an answer to the spirit inside the cloth was a puzzle that challenged my thoughts and understanding. I have searched for the roots of Malays for a long time, and came to a dead end. However, in the end, the very format of Malay lore and teachings were revealed from your cloth – this cloth from the Mayas, that has crossed Nusantara (Malay Archipelago) via innate (internal) technology. Melayu (Malay) and Maya, are from the same origin.

Ines, do not touch this cloth that was once ‘owned’. All objects have life and are placed in a temporary form. Old objects contain live knowledge, and are centred upon the landscape of Lemuria. The Lion for Mayas, the Tiger for the Malays. They each have their own villages (kampong) in which they live, and they are respected, just like humans. The Chief Kampong is in Gunong Ledang and is usually guarded by the lore of Malay ‘magic’. A Panthera Tigris Malayensis stamp has been planted of each corner, and blessed with the verses of the Ayatul Kursi (The Verse of the The Throne- Holy Qur’an 2:255), to ensure that the tiger cannot break loose. Therefore, with abso- lute conviction, this cloth that I have received is not a coincidence.

From the owner of these hands, and one who breathes through Him.
shooshie sulaiman 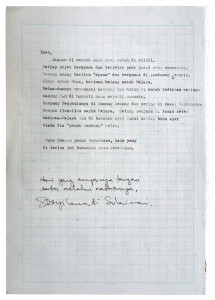 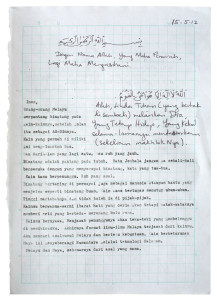