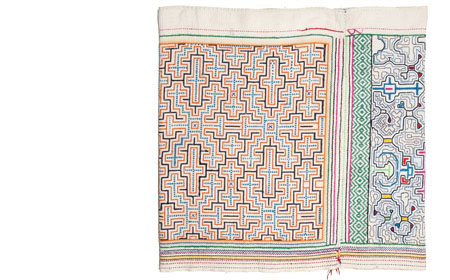 Gold | A llama wished to have / golden hair, / brilliant as the sun, strong as love / and soft as the mist / that the dawn dissolves, / to weave a braid / on which to mark, / knot by knot, the moon that pass, / the fl owers that die.

‚All that glistens is not gold‘. The phrase is steeped in a European moralism, both wary of beauty and thoroughly hypocritical. It was not a view shared by Andean societies from long before the Inkas and far into those territories they did not conquer. Gold and silver were valued for their colour and craftwork, metallurgy was both colour and surface oriented, so that sophisticated methods of the gilding all kinds of metal were common. For them, surface was not a deception, but the visible manifestation of an inner state.

This was of no interest to the Spanish invaders, mostly adventurers from the lower classes, for whom gold meant money, the ability to buy anything, and thereby raise their status. Their own aristocracies, it is true, liked the appearance of gold thread woven into their velvet clothing, indeed in Europe there were two separate guilds for gold thread craftsmen, beaters and pullers—though in sophisticated India there were seven separate crafts—, but for them it was precisely the appearance of such thread that did matter as a signifi er of power. For the invaders themselves however, it meant that they too could live like lords, and provoked a greed that saw them ripping off the gold sheathing from the Coricancha sun temple in Cuzco with crowbars, fi ghting each other, and getting hooked on a childish and cruel fantasy of such greed, El Dorado.

In the case of Coricancha, it could be said that the Inka were asking for it, since they enforced their imperial ideology as being directly descended from the sun, by saying that the sun talked directly to them through the medium of gold. El Dorado itself, based on shadowy directions to its location left by on a drawing later in the 16th century, is a story that has run and run right up to the present day.

The reality is more brutal and sordid. The story is that a chief of Muisca people around the Lake Guatavita in what is now Colombia was covered with gold dust at the moment of his initiation and either dived in or went out and threw gold pieces into the lake. For these people gold represented “the energy that existed in “the trinity of Chiminigagua which constitutes the creative power of everything that exists“. They were expert goldsmiths but had to trade outside of their region for the gold itself. However, when a Spanish expedition eventually conquered the area in 1537—8, they got a huge hoard of gold but still not satisfi ed, burned off the feet of one leader to fi nd out where there was more, and found none.

This kind of cruelty was common to what happened in Latin America. The gold rush kings of 18th century Brazil were able to “execute violence without any fear of the law,“ and set new standards in nouveaux-riche vulgarity. Nowadays the gold rush is the business of hedge funds and investment managers, enjoying a similar impunity, but always anxious that currencies un-backed by gold since 1971 may, at some point, be not worth the paper they are printed on, or perhaps holding a secret belief in Marx’s labour theory of value which assumed gold to be its only measure. Meanwhile its price is at an, ironically speculative, all-time high, its glitter as powerful as ever.

1859 | A campaign was begun by Muslim tenant farmers in Bengal against being forced to continually grow indigo as a cash crop for British Planters, who were making fortunes from its large-scale export following their arrival from their West Indies plantations in 1788. By 1815 with an increasingly monopoly position, Bengal was already exporting 3,500 tonnes of the dye. The price paid to the farmers had been fi xed in 1800 and not increased, while the price of rice had increased sevenfold. The situation had been worsened by fi ve years of bad weather and low yields so that the peasant couldn’t recoup their advances. Their grievances, anticipating those of so many cash crop farmers, were expressed in a satirical play—Nil Darpan—created in support of the struggle: “Then, if we are to give sixty bighar for the cultivation of indigo, we cannot engage in any other cultivation whatever, then we shall die without rice crops.” The planters themselves had formed their own association and blamed the Lieutenant Governor of Bengal, J.P. Grant for giving the green light to peasant resistance when he advised magistrates to protect the rights of farmers and made a circular curbing excessive demands on them. He was forced to resign before the end of his term. Early in 1860 all the cultivators of the Barasal refused to sow any indigo. Their refusal soon spread across Bengal. In the same year, as the peasant farmers grew in confi dence, factories were burned and indigo plants destroyed. The British, worried by the scale and level of self-organisation involved in these attacks, did not send in troops but established a Commission of Inquiry, which was somewhat critical of the indigo business. The disturbances however had longer-term consequences, they “fi rst taught the natives the value of combination” as one observer said. It created a precedent for the Indian Independence movement. At the same time in another empire, the Ottoman Pasha of Sudan was pushing peasants there to produce only indigo at little profi t to themselves and to the exclusion of food crops, which was also to create a revolt culminating in 1882. What radically changed the business itself in both places, to virtually destroy natural indigo dye as a profi table concern, was the creation of industrial-scale chemical indigo dye, a process which began in this same year of 1859. It was when the German chemist August Wilhelm Hofmann obtained the fi rst synthetic purple dye from coal tar, having worked out how to transform benzene into dye.

December 31, 2011 | It’s a length of white cotton, loosely woven on a backstrap loom. On it has been stitched a pattern—an Ariadne’s maze in black, green, orange, magenta, yellow, teal, crimson, turquoise and black. Or if not a maze, a circuit board. Such metaphors are my translation. The fabric came from Peru. Its pattern was dictated by vibrations that a Shipibo woman heard during a dream induced by Ayahuasca, a psychotropic brew made by fermenting a certain kind of vine and a certain kind of shrub. The fabric is that woman’s translation of her dream. As no two dreams are the same, no two weavings are the same. Thirtyfour years ago, when Ines bought the fabric in Peru, she decided to use the fabric as a skirt. Skirt is the translation Ines laid over her body. The elements in this chain are not decoration, but language. But what language? The language of fabric against skin? The language of ornament? Of the bodies of women? Of the dialect Ines and I use between us? Of the peregrinations of objects made for the tourist trade. The text you are reading is my translation of Ines’s dream. If you are reading my words in Spanish, you are reading a translation of my translation of her translation of her translation. We skirt the issue. Fabric is delicate. The idea of a dream rendered in thread that traveled from Peru to Vienna to Los Angeles protects each translation from the next.

In return for the skirt, I offer an extended metaphor. Historians of the eighteenth century, particularly those interested in the lives of women, know that the largest collection of textiles used by ordinary people in ordinary life is held by the Foundling Museum in London. Located in Brunswick Square, the museum houses the remains of the Foundling Hospital, an institution created in 1740 to remove from the streets of London the children of women who could not care for their offspring, either because of extreme poverty or because of their unwed status, both conditions being the consequence of moral laxity. (George Frideric Haendel and William Hogarth were among those involved in the project.) By 1760, that is, in a mere twenty years, the hospital had admitted 16,282 children. No records were kept that would identify the child or the parents. Upon admission, the child was given a number and a new name. Parents who hoped to reclaim their child one day left a small piece of fabric which hospital officials pinned to the ledger page that recorded the date of the child’s acquisition, along with her weight, hair color, physical condition, marks on the body and so forth. The scrap of fabric was the translation of a child. An accurate description of the scrap, or the woman’s offering of a matching piece of the same fabric, were the only way to reclaim a child. The museum retains about 5000 scraps of linen, muslin, calico, gingham, satin, susy, calimanco, linsey, worsted and flannels, a world of names for touch against the skin covered with dots, stripes, checks, plaids, flowers, butterflies, birds and abstract patterns something like a circuit board. Reds and blues predominate, though rose, pale blue, and lime green are also to be found. Only 152 children were successfully retrieved by this system, something like a coat check applied to infants. 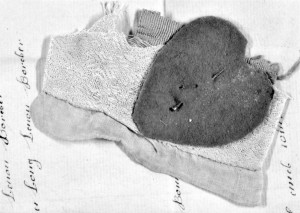 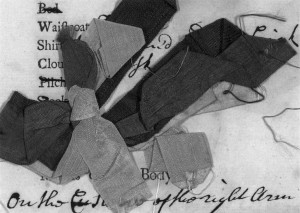