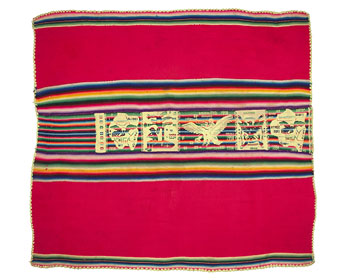 Indian Yellow | The pigment enjoyed great popularity in 19th century Europe among painters, and especially in Britain, where it represented a breakthrough in conveying “a wider range of fl esh tones, especially at the darker end of the spectrum”. In this it was far superior to British produced ochre or a previous yellow coming from India called gamboge. Its popularity coincided with varieties of racism that proclaimed themselves as ‘scientifi c’, for which racial identity in a painting had to use prescribed colour combinations, as well as demanding stereotyped faces. It was a time when British art teachers were preoccupied with the standardization of colour vocabulary with words like ‘dusky’ and ‘swarthy’. Its disappearance from the palette early in the 20th century is a story of the shifting priorities and reactions of British colonialism in India. Indian Yellow or Purree was produced from the urine of cows fed exclusively on mango leaves mainly in Bengal. The profi ts were enormous. The market price in Calcutta would be 100 to 200 times that given to the farmer. But towards the end of the century some reports suggested that cows fed in this way suffered malnutrition and died early. This might concern animal welfare groups in Britain, but what really concerned the British was the development of indigenous Hindu Indian cow protection societies in the 1880s. They were well organized and Lord Lands downe referred to them as the greatest threat to the British government since the “Indian Mutiny”. The fact was that in the Indian Penal Code of 1860 drawn up by the British, the cow was not a sacred object and this was reasserted in 1888. It was to pre-empt further development of this organizing that, without specifi c legislation, they placed a ban on Indian yellow and went out of their way to make it known that this was what they were doing. It was a case where, as Jordanna Bailkin makes so clear, “the desire to paint or visually represent colonized people came to clash directly with the mission to rule them.“

1917 | As he freely admits, Mahatma Ghandi—who had been consciously experimenting with different kinds of Western and Indian costume for himself— had never seen a spinning wheel (charka) in his life when he returned to India in 1915, even though he had chosen it as a symbol of the Indian independence movement. On arrival he then could not fi nd one. But from as early as 1908 he was advocating homespun weaving as both practical and political at a time when hand spindling had almost disappeared. Indeed, he confused the charka with the kharga (handloom). More practically he had seen unemployment as a women’s issue, and that previously spinning had been a source of income for women of all castes. It was then a woman naturally enough, ‘an enterprising widow’, Gangaben Mujmuder, who was to make his ideas work. In 1917, after much searching she found spinning wheels in Vijapur, Baroda state, and went on to organize a spinning centre there. Though it was another follower, Maganhal Ghandi who made mechanical improvements to the wheel, it was she who then found a Muslim weaver who could train other weavers—who had until then woven only mill yarn—how to weave the homespun and make the khadi cloth that became a symbol of self-suffi ciency. It was she again who organized a solution to making khadi of greater width, so that Gandhi himself was not “forced to wear a short, coarse dhoti.” The dhoti (wrap around cloth) and the cap made from khadi cloth were articulated as anti-colonial dress and recognised by the British as such. Soon afterwards another woman, Gangbehn Ramji, became an expert teacher at the Ashram in the weaving of khadi dhotis. Meanwhile Ghandi himself contra his stereotyping, insisted on “untiring research on the spinning wheel…We have manufactured scores of them, but now we have to produce an expert who is well-versed in the manufacture of machines.”

On Object Communication | What makes an object speak to me? In the daily use of language, we talk of something, usually an aesthetic object or cultural artifact, as something that does or does not speak to me, meaning that this thing may very well be interesting or brilliant, but not so to me as a recipient, or, moreover that it does not intend to speak to me, that it does not speak my language. This is no simple transmission of meaning or affect, however, since the language through which this object supposedly communicates cannot be so easily identified or classified, nor even its very status as intentional, as having an agency and authorial voice—that a thing could ‘speak’ to you, circumvents the very relation between subject and objectThe core of this enigma is thus twofold: that an object can be active towards the gaze of the subject, that it is at all capable of communicating, and, secondly, that such a communication constitutes some sort of language, whether familiar or alien, and as such decipherable and translatable. In the first instance, the status of the object as intended, would seem to have to with its origin, whether a natural or cultural object, where the latter would always be representation, as well as having potential use and exchange value. However, objects found in nature also have shapes, sounds and colors that render them more or less aesthetically pleasing (depending on cultural contexts and readings, of course), more or less alluring or indistinguishable, more or less visible or readable. But does this visual appearance or identity, whether it makes the object stand out or blend into the background, mean that the object is intentional?

Interestingly, this is not only a religious question, ranging from pagan beliefs in the magic of certain objects to the Christian notion of pantheism and beyond, but also a modernist conundrum. Again, this may appear surprising: whereas the modernist tactic of a universal language of abstraction for the cultural production of objects is well known, we also find a theorizing of intending objects outside this authored policy, at the very margins of modernist thought, and sometimes it is as if one can only see the whole field from precisely the margins, at the very edge, which is perhaps why it is precisely these obscure texts that have found a resonance with contemporary writers. Here I am thinking of the work on the subject by such writers as Walter Benjamin and Roger Caillois, that, albeit with different approaches and intentions, were both concerned with what has been termed the language of things. Indeed, Kaja Silverman has employed the term ‘the language of things’ in a book with the programmatic title World Spectators, drawing on exactly Caillois theories of intentional objects and insects in an elaboration of how things communicates and desires the gaze of the other, and Benjamin has written a text of the idea of object communication, recently revisited by Hito Steyerl in an essay entitled exactly ‘The Language of Things’.

Silverman reads Caillois texts on insects and rocks as aesthetic, such as his tellingly named The Writing of Stones, as drawing attention to themselves through their beautific appearance, and thus as communicate, in the establishment of a specific aesthetic subjecthood, a desirous exchange that is nonetheless initiated by the objects of the world rather than the (human) subject, thus creating a language of things in the forms, shapes, contours, colors and so on. In other words, a communication of form that is primarily corporeal, and not semantic, even if structured like a language. Benjamin’s text, on the other hand, posits and contrasts two actual, if separate languages, the language of things and the language of men, the first one mute, the second one fully immersed in institutionalized practices. As Steyerl—who accurately describes it as the weirdest of the weird of all Benjamin’s texts!—points out, Benjamin does not describe human languages in terms of nations and peoples, but as institutional practices, and thus as discourse, which would also lead to another understanding of the concept of translation. For Steyerl, crucially, such a translation is made within the assemblage of images in artistic practice, translating, if you will, from one organizational form to another.

This language of things can provide us with the possible coordinates for looking at objects that have, perhaps, been falsely institutionally described, such as Ines Doujak eccentric collection of textiles from the Andes, whether in their ‘original’ form and context, or as translated assemblages in Doujak’s modifications of them. Rather than interpreting them, giving immediate and obvious meanings to the images of, in this case, the map of Bolivia, or the sign of the eagle, or of the machine gun or the peace pipe, or speak about the brightness of the colors or the architectonics of the weavings, we must try to think of the thing as a thing, and ask ourselves: how does it speak to me? Walter Benjamin, ‘Goethe’s Elective Affinities’, Selected Writings 1913—1926, Harvard University Press (Bellknap): Cambridge, Mass., 1996, pp. 297—360. Roger Caillois, The Edge of Surrealism, Duke University Press: Durham & London, 2003. Roger Caillois, The Writing of Stones, University Press of Virginia: Charlottesville, 1985. Kaja Silverman, World Spectators, Stanford University Press: Stanford, CA, 2000 Hito Steyerl, ‘The Language of Things’, http://eipcp.net/transversal/0606/steyerl/en 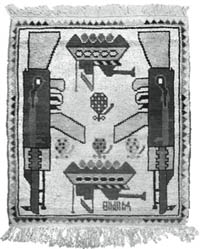