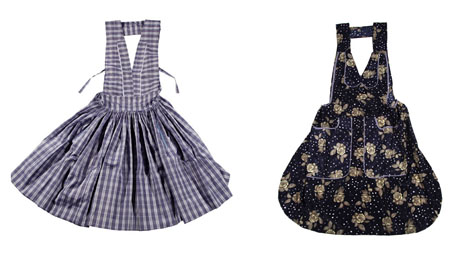 Remix | In 15th century Italy the showing off of wealth involved using too much velvet cloth for clothes, which lead to vast portions being destined for the scrap heap. “In reality of course, everything was saved and re-used in making shoes, purses, muffs and border; velvet with gold ground which are especially strong structurally, were used right down to the smallest snippets and were always saved from discarded clothing and re-cycled in other items.”

The celebrated Navajo weavers would unwind red thread from a commercial wool flannel called Bayeta cloth, like that from the blankets of Spanish soldiers in Mexico, and reweave it with other dyed and spun yarns. This was because although they had a range of wonderful dye colours they did not have satisfactory red. One step back from this and the very Bayeta cloth was originally English bay (‘a coarse open woollen stuff), exported to Spain where it would be dyed red with that country’s abundant supply of cochineal. It would have been easier for the Navajo when it became available from North America where it was being advertised in 1746.

Contemporary Mayan women make ‘bricolage’ textiles “often constructed with more creativity than grace, they compose fragmented influences: wool and wild cotton, acrylic and synthetic metallic yarns; indigo and aniline dyes; rickrack, lace, gauze and polyester. This is more than making do’, rather that the ‘appropriations’ and improvisations in women’s textiles are deliberate and sometimes culturally subversive.”

As the Chiriguano Guaraní agricultural festival has joined up with the criollo carnival, “keeping its social cohesion and proprietary rites through a ceremony full of alien signs without losing its originality and its poetry. The masks used for the ceremony are of chané arawak origin, the top hats are a colonial legacy, the outfits show an Andean influence on mestizo clothes, the ornaments are Chiriguano, Criollo, Andean, Nivaklé, Lengua, maybe Mennonite. Some of the disguises, alongside jaguar skins, heron feathers and caraguatá textiles use motorcycle gloves, fake wigs and dark glasses. Wooden samuhú masks are decorated with falcon wings that carry, like a collage, a face cut from a magazine, masks made from the fur of wild cats, pecarí or wild deer co-exist with others made of cardboard and plastic; representations of ancestors or mythological beasts share the festival with Batman and ET.”In Kayapo culture in Central Brazil õ nêkrêx, refers to ornaments or specific rights that are individually inherited and are highly esteemed. Innovations in ornamentation become the ritual privilege of the inventor, though they may have originated with other groups. „After a fire destroyed one village the feather headdresses for the final dance of an important ceremony were lost. Without the headdresses it would be a shameful show. Someone had the idea of going to a town and buying up plastic drinking straws in different colours and with this made a headdress that, from a distance, looked just like the áká feather headdress. The monopoly right to make it was passed on as an inheritance, but the recipient generously ‘lent’ them to people who didn’t have enough feathers or simply fancied wearing the new version.“

The aparapitas, load carriers of La Paz were described in the 1970s thus: “He has patches in all colours and shapes, in all kinds of fabric…Felipe saw patches as little as a thumb nail and as big as a hand; he saw patches from velvet and leather, from hessian from flannel, from silk, from floor-cloth, from wool cloth, from canvas, from rubber, from denim, from jute, from chamois leather, linen and oil cloth. He saw patches which were circular, square, triangular and many- sided, some fitted perfectly, others ugly, others neat, but all sewn very tight – and as a matter of course with the most diverse materials: thread, hemp, electric cable, shoe laces, wire and stripes of leather.”

2002 | In Saudi Arabia 14 Mecca schoolgirls at the Makkah Intermediate School No 31, Saudi Arabia, were killed by a fire. The school was run by the General Presidency for Girls‘ Education, a government agency controlled by conservative clerics. It had ignored warnings about the dangers of overcrowding in the school which was kept locked to ensure full segregation of the sexes, and where there was also a lack of fire extinguishers and alarms. The deaths however were made certain by the actions of members of the religious police, the Committee for the Propagation of Virtue and the Prevention of Vice, who stopped girls from leaving the building and hindered rescue workers because the girls were ‚not properly covered‘, that is, in headscarves and black robes (abayas). In the eyes of the religious police there was a danger of physical contact between the girls and the civil defence forces, which might in turn create sexual enticement. One witness reported seeing three policemen beating girls to prevent them from leaving, and another reported being stopped in attempt to help them because “it is sinful to approach them.” A Civil Defence officer said, “Whenever the girls got out through the main gate, these people forced them to return through another.” This resembles the so-called “Shirokiya Incident” in Tokyo in 1932, which was a highly publicized tragedy that called attention to the kimono’s shortcomings and prompted many women to adopt Western-style undergarments. In this incident, female employees dressed in kimono were trapped on the fifth floor of the Shirokiya department store when the building caught fire. Newspapers reported that many of these workers died in the fire because they did not want to leap from the building for fear that they would expose their undergarments to those on the ground. Immediately a law passed requiring salesgirls to wear panties, and two thousand years of fashion changed.

Pinafores | The parcel arrives from Somewhere via Vienna, where it had been opened, its contents taken out, aired and evaluated, then caressed for awhile – until it was time to put them back again, envelope them in their wrapping and bury them in their box.

I myself have never been to Somewhere. My imaginary relationship to the place is insufficient. Now, to some people, blankness is a potential, to be turned into color and sound and diagrams and stories by conjecture or projection or research. Not to me. I cannot go to that blank space.

What stands between me and Somehwere is not wisdom („Better not go down that path, you might burn your fingers…“). Between me and Somewhere stand those two, Vienna and the parcel. To Vienna I have been. Vienna I know. It is where she lives, she who sent the parcel to me. Vienna (and she) are attendant in my fantasies. They are ghosts that I find quite comfortable to live with. The parcel, on the other hand, is simply present. It appeared one day on my doorstep and now it is sitting in front of me, waiting to be opened. So I do. Open it, that is. It contains aprons.

They must have been caressed by her, those aprons, I cannot imagine differently. She would find them endearing, in their plainness. It is not that they have no frills, just the contrary, they are certainly frilly. In fact, while I unpack them, they open like paper flowers. Starched ruffles start breathing, taking on a life of their own. Or so it seems in those first moments of our aquaintance. But, boy, they are plain. Even their patterns are plain. Not kitschy, not conceptual either. I can divine no secret in those patterns, no meaning, not even heritage. They neither seem to say: „Chola“, nor: „Made in China“. All I can hear them murmuring is: „Pattern.“

And look at the colors. Are those actually colors? Muddy browns, nowhere near those earthy tones easily associated with expensive natural fibres. Dispirited flowers huddling on darkish ground. As if they had been washed too many times. Even the pinks seem grey. I take flight to other associations: The Japanese, don’t they have a knack for finding beauty in even the dullest fabric? If I adopt their perspective, I might… – no, something is still off.

Let’s look at the fabric. Not plastic. Definitely cotton. Thin though, but not thin enough to be cousin to those fancy transparents – christening robes, lace hankerchiefs, mantillas. Rather „thin as in cheap“. No one would want to dry their hands on this kind of apron. Wet hands before drying. And disillusioned wet hands afterwards. I remember towels like these from communist times. No use value at all, even after the starch had been washed away. Wait, I also saw them in my neighbor’s kitchens. On the wall. Towels as decor. Apples and birds flying all over the place.

Slowly, understanding dawns. From those strange animals, – by now, I have unwrapped all and spread them out around me (a room full of aprons!) – from those strange animals, from those disheveled birds emanates a story. (More likely, I am projecting onto the poor things, yet, clearly, a bond has been formed between us.) It is wrong to call them aprons, they answer to another name, old fashioned, but much more astute: „Pinafore“.

Imagine two resolute hands appearing from behind, taking up the pinafore, giving it a firm shake, thus making order of frills and folds and then placing it carefully before the body. The halter goes over the neck; strings are tied round the midriff, a perfect knot and bow centered in the back/in front. Before coming to rest, both hands (still red from prior scrubbing) give the pinafore a last stroke, straightening all residue of willfulness from it, there, finished. Her story is another one. As a girl, she wore two. One was part of every day. It was supposed to protect a dress from dirt. After all someone must clear men’s dirty dishes from the table. Sauce sloshes over, seeping into cotton. Wet hands (or dirty ones) do indeed get dried (or cleaned) repeatedly. Maybe a nose is sneakily blown on a corner of the thing. And then comes Sunday. The dress is changed. Another one is taken out of the closet. A nicer one. Not that it is more comfortable; to tell the truth, it scratches at the neck, but so pretty, oh so pretty…! And a new apron is pinned on as well.

Alas, even on the holiday, dishes need to be cleared away. And washed. Chores done, a girl might want to go out to play with the other kids. It is obvious, that this girl cannot be trusted to keep her pretty apron fine. The one only worn on Sundays, along with the scratchy dress. What do do, what to do? Her elders know to make things right, how to crush a spirit well. It is decreed that on Sundays, she wear two aprons, the dirty one on top of the virgin, protecting it (and the dress, and the body under it) from evil.

The girl has grown into a woman. She does not do protective gear. She cooks as she lives. Pleasure is at most an arm’s length away. (Do not kid yourself though: These things are never just there. She has worked hard to get here.) She relishes her silken pants. Fully aware of the stains that might be.

I imagine the women to those pinafores. In my fantasy, they garb themselves with self-respecting womanhood. Their garments do more than embellish their bodies. Their bodies do more than embellish their garments. As the knots are tied and the folds stroked flat, their bodies become round and real to themselves. Is it truly the fabric that is caressed, not the thigh hidden under it? She, I know, neither caresses out of desire nor out of pity. She loves the thought that the women feel beautiful in their pinafores. And she likes that the pinafores are pretty, despite their lack in refinement. In fact, the multitude of their lacks (lack in practicality, lack in aesthetic finesse, and now, lack in intended usership) secretly delights her. They are autonomous things. For now.