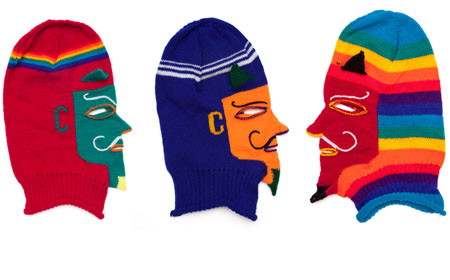 Velvet | On the 26th December 1476, Duke Galeazzo Sforza, ruler of Milan, was murdered by his own courtiers angered at losing their places to favourites, and to unprecedented taxes placed on them by the Duke’s extravagance. Clothes were his obsession, designing the costumes for court personnel and his mistress himself; a bureaucracy for clothes was created and the whole court’s wardrobe renewed three times a year. Velvet woven with silk was a speciality of Italian city-states and the most expensive material of the time. It became a chief cause of the Duke’s downfall. Spending on this material alone increased by 500% in the six years between 1469 and 1475, absorbing not just a large part of the city’s budget, but requiring a large loan from the Medicis. His was a dramatic case but even in England a duke might spend half his annual rents on a velvet doublet with gold thread inlaid.

Italy, starting with Lucca in the late 13th century, became famous for its velvet production from them on, and city-states like Venice became rich from its production. Originally the material was imported from Cairo, which from early in the same century was its largest producer of silk cloth using yarn that came from China and India via Baghdad. From the 10th century the city was possibly the biggest textile producer in the ‘Old World’. Another aristocratic enthusiast of this time was Musa I ruler of the Mali Empire who found the fabric as he passed through the Egyptian city on his pilgrimage to Mecca in 1324, and brought velvetweavers back to Timbuktu. A locally produced crimson velvet caftan was made for subsequent rulers. At the same time that Duke Galeazzo’s velvet fetish was costing him his life, Mehmet II ruler of the Ottoman Empire had no such problems. Using silk from Bursa, Turkey, he was able to have even assistant cooks dressed in blue-coloured dresses, conical hats and baggy trousers all made from the material.

During these periods this ‘three-dimensional’ cloth, which allowed for shifts in its lighting and changes of colour as it moved, was woven only with silk, and its highly specialized craftsmen in Italy enjoyed far higher wages than those of other weavers. Fortunes were built on its manufacture, banking dynasties like the Medici evolving from the money it made. Conversely wearing velvet was a means of showing off wealth and power, and the object of various ‘sumptuary laws’, which banned most classes of people from wearing it. Originally it was reserved just for the aristocracy but the advance of the merchant-banking dynasties, made a de facto shift in the matter of its wearing. The Duke’s case was extreme but a showy vulgarity was not unique. More cloth was being used for each garment, “an excessive, pompous and improper use” of it, “an open and lavish wastage of resources: growing size of outfi ts, trains dragging on the ground, linings more valuable than the outfi ts themselves.” The cut and line of clothes was spoiled simply to show the amount of cloth used, but it also functioned to show off one’s status in a more brazen manner: “The outfi ts increasingly featured forms that hindered movement, accentuating all those features that had nothing to do with manual labour such as the excessive length and volume of the gowns and exaggeratedly long and ample sleeves.” This changed and has continued to change as fi rst linen, cotton and wool were used in the complex weaving of the fabric, and nowadays a variety of synthetic mixes with natural fi bres and synthetic themselves. Its democratization fi rst begins in its use on interior furnishings and how it became a must-have for opera houses and then theatres, and the curtains, trim and even seats of cinemas. The deep red plushiness of it all is an integral part of the pleasure of being taken into another, often exotic world on the screen.

1954 | On 2nd June 1954 a strike seen as a ‘human rights strike’ at the Omi Kenshi Spinning Company in Japan—a silk and thread factory—began. Many of the workers were young women from rural areas considered to be ‘docile’ in the especially authoritarian company. It held monthly conferences to select and fi re workers who were sick or otherwise could not work hard enough; had a comprehensive spy work which included the opening of personal letters and searching of personal possessions; unpaid overtime; imposed Buddhism as the company religion; controlled the non-working hours of employees; and would not recognize the trade union. There is a suspicion that this fast-growing com- pany had annoyed the “Top Ten” textile companies and that they encouraged the Unions to make an issue of these conditions. If so, they misjudged the situ- ation because the workers surprised everyone: women marched with placards in front of the company’s buildings; and they held out for 106 days to win the freedoms they had demanded, and also gained approval of the new Union, overtime pay, and paid vacations. The government was seriously alarmed and tried to crack down on Unions following the Omi Kenshi, strike but it inspired one of 140,000 workers the following year of 1955 both for higher wages from the major ‘Top Ten’ companies themselves, and for recognition of the Zensen Union. Government and employers were surprised by popular support for the strike and after 20 days, in which the media’s useful idiots tried to characterize it as the ‘caramel’ strike, as the amount of money involved was small, and the workers were women, a compromise was reached. It favoured the Union and, as a result its membership, which had been just 67,000 in 1946, rose to 600,000 by 1973.

“A representation which is divorced from the consciousness of those whom it represents is no representation. What I do not know, I do not worry about.” | Nothing is immune to co-optation, and some cooptations are very odd. La Paz is an unlikely destination for even the most adventurous Russian football hooligan. But still. The mask is obviously from there. Maybe it was bought or traded via ebay. Who knows. The loving detail of the patterns, the finely knit alpaca nose and nostrils gives you a soft clue: these masks might have had an artistic-ritual use in carnivals or other religious processions, where they could to hide the wearer’s identity and to turn him or her into an avatar of some more abstract force, perhaps even that of some fundamental anonymous violence: the knit mask’s face could be that of an exploitative white clown, especially if it were historicized by the mustache of a Spanish conquistador like some masks are. The one in Die Zeit’s picture from the Manege riots of Decem- ber 2011 in Moscow doesn’t have a mustache. The mouth is embroidered, hockey-mask reminiscent of Hannibal Lecter: a Friday the 13th guarantee of anonymity for nationalist football maniacs out on an axe-murder rampage. What scares the German Bildungsbürger here is an intentional misunderstand- ing: it presents something like a post-colonial black bloc self-image of generic protest anywhere at all where tear gas is deployed. The result is strangely flattering for the Russian nationalist football fans. He can lose his identity and join in an unconscious solidarity much bigger than himself. Something is wrong in this picture.

Things changed again with Pussy Riot. I thought their bank robber baklavas looked extremely familiar, though I couldn’t figure out why. It was only when they performed their punk-prayer that I got it. This is much closer to some inner solidarity with Aymará women who donned these masks to become their conquistador-oppressors, inhabiting that heartbeat of a heartless world that pulses through prayers. Here, I have to think of the half a million pilgrims who stood in line to touch a relic of the Virgin Mary’s pregnancy belt at Christ the Savior Cathedral in late November 2011, right before the opposition’s constituents underwent their political epiphanies. Unconsciously, this grotesque procession looked like an update of 19th century Russian realism in the age of immaterial labor: pensioners, off-duty security guards, clerks, office workers, waitresses all devoutly crawling through the cordon as the mirror image of our own pilgrimages to Opposition meetings. “Black robes and golden epaulettes,” “an Easter procession of black limousines,” while “gay-pride is sent off to Siberia in shackles,” as Pussy Riot sang in their recent punk-prayer at the same church, in which they ascended onto the dais of the altar to perform a song with the brutally clear chorus “Mother of God, chase Putin away.” What makes this quick-and-dirty hyperbole, lip-synched to go viral as a bad (or bad-ass) reproduction on YouTube so spicy as an image is that it consciously misrepresents the protests, reducing them to calls for insurrection and open violence through ultra-leftist radicals wearing Commandte Marcos baklavas. This is exactly the kind of iconic image the protest movement has been trying to avoid, with its emphatically anti-revolutionary rhetoric, its consolidation around patriotic if not national-democratic values, and its respectful avoidance of any critique aimed at the Russian Orthodox Church as one of the state-ideological apparatuses that has filled the void left behind by the Communist Party. By resorting to such conscious hyperbole, Pussy Riot’s incantation channels an apolitical indignation that otherwise cannot rise above the horizon of civic concern and fear at the most forcible possible repression.

Pussy Riot really seems to have hit the mark, and the repressive apparatus is immense. A intra-agency task-force was created to find and apprehend two of Pussy Riot’s key activists on shaky legal grounds, stripping Maria Alyokhina and Nadezhda Tolokonnikova of their masks, and turning them into two beauti- ful young mothers who now may face up to seven years in jail. This overly harsh response has drawn the broadest criticism, and not only from the usual suspects: even leading clerics in the Russian Orthodox Church have come out in defense of the activists by asking for the mildest possible punishment, some even amplifying Pussy Riot’s critique, and attacking the hypocrisy of their own institution. But even more importantly, Pussy Riot has raised an unexpected and under-represented feminist voice in the current opposition, putting the “miss back in representation” in the most decisively gendered way. This is not just about the president-elect and his machismo. Nor is just about about what contemporary Russian capitalism has done to women over the last 20—30 years, how it has subjected them to a forcible regendering, replacing that contradictory thing called Soviet emancipation (though implictly heterosexist and homophobic) with a consumerism rife with 1950s-style chauvinism, under- pinned by the reinstated simulacra of traditionalist patriarchy. This re-gendering mirrors other similar processes of expropriation and re-subjectification that have taken place over the last 20—30 years. Former Soviet citizens from the Central Asian Republics—once subjects of all the contradictory and doubtful (inter) nationalism the Soviet Union offered—have become subaltern migrant workers from distant friendly dictatorships, (re)productive slave labor.

Karl Marx, Debates on Freedom of the Press and Publication of the Proceedings of the Assembly of the Estates; Rheinische Zeitung, No. 130, 1842.
For more information on Pussy Riot’s incarceration, visit http://freepussyriot.org