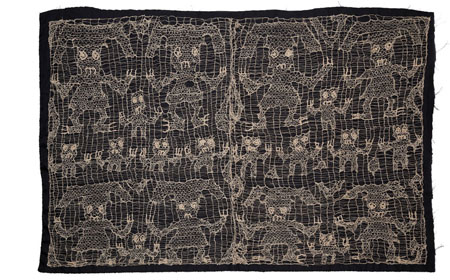 Acryl | Of the variety of basic synthetic textiles that were developed in the last century, yarn, fi rst produced by Du Pont in 1950, is most akin to wool. In the Western world of knitters there are ‘yarn snobs’, for whom acryl is cheap and nasty, scratchy and sweaty. Naturally enough an anti-snobbery discourse develops in tandem, one which might admit to the sweaty quality of its warmth, but praises precisely its cheapness, washability, and for how well it holds a par- ticularly bright range of dyes. In between there are not only a variety of mixes, especially with wool, but divergences of quality even among 100% acrylic yarn. “Caron One Pound” for instance, is highly rated for its worsted-type weight and for the particularly saturated and exciting colour it is dyed. This snobbery also refl ects periodic Western hysteria about what is ‘authentic’, prevalent since large-scale industrialisation, mixed in with notions of the ‘natural’ in relation to textile fi bres; a case of looking somewhere else for its lost origins. This produces a veritable torrent of ironies, starting with the very idea of a natural fi bre when the reality, in the case of cotton say, is a saturation with synthetic chemicals used both in its growing and in the various treatments applied to its transformation into cloth.

More telling are the variety of pressures and desires that make it more likely that people like the highland Sakaka of Bolivia have “come to rely on acrylic yarn while elite cosmopolitans use natural fi bre.” What is ‘modern’, ‘civilized or uncivilized’, smart or not, remains determined by the powerful. This is how it is, while at the same time there is an “international market for antique Andean cloth” as part of a worldwide demand for the authentic as both hand-woven and ‘ethnic’. Some Sakaka people sold them for money, others exchanged them for “factory-spun synthetic fi bre yarns in fashionable colours.” Either way it has incurred a loss of knowledge, both of technique and aesthetic. Their own dress-style refuses essentialization, likely to be a mixture of new and traditional styles, perhaps a traditional natural-fi bre skirt and a synthetic wool sweater. The mix and style might depend on whether worn in a town or the countryside in a country where until recently, ‘authentic’ dress classifi ed one as both Indigenous and inferior.

The demand for synthetic yarn is a consequence of both, desire—a love of its bright colours—but also of pressures which make the ‘authentic’ impossible. Wool is harder to get as local sheep pasture is degraded and the trains of alpaca and llama that once passed through the area no longer do so, a tradition that has become ‘uneconomic’. Natural dyes too are harder to fi nd because of that loss of accumulated knowledge of technique. Other ‘modern’ changes in the regional economy have meant men having to go to work in cities like Buenos Aires. A consequence is that women are having to do more agricultural work leaving less time for the time-intensive business of spinning and weaving. One innovative way out of these externally imposed contradictions has been shown by the handloom weavers around Apu Ausengate near Cuzco, Peru who have another kind of ‘yarn snobbery’; they like the colour of acrylic yarns, but don’t like the way it is spun. Acrylic fi bres are either dissolved polymers which are extruded into warm air where the fi bres solidify by evaporation; or are dissolved and extruded into a bath and then dried. Either way the manufactured yarn is perceived to be poor quality in local Quechua aesthetics. So the women re-spin the manufactured synthetic yarn on drop spindles before use. Properly spun yarn is needed to satisfy both these aesthetics, and ancestral rules for highly valued textiles that are for use rather than for sale to the outside world. It also makes the yarn fi ner. The skill in re-spinning involves keeping up a constant rate of twist on the spindle, waiting till the moment it kinks back on itself and becomes smooth, and then holding it under tension until it is on the loom bars. For young people in the Cuzco area, synthetic clothing and textiles represent honour, prestige, modernity and youth. 70 years old weaver Martina Ccachin commented, “Even my husband wants me to weave his poncho out of synthetic fi bre as if he was still young.”

1377 | The wool weavers of Ypres, Flanders, launched an uprising to protest against their conditions, marking close to 100 years of contesting the power of cloth merchants that were backed by the military arm of the Flanders aristocracy, and sometimes by the French state. During all this time the town was an internationally famous centre of cloth production for export, highly prized from Russia to North Africa. It was also a time when “weavers did not become heretics, heretics became weavers” because of the possible freedom of thought that went with owning the means of production, the loom. The fi rst revolt took place in 1280 and was aimed at the guild and jurymen power of the merchants, which had allowed them public control by means of inspectors from whom weavers and their helpers were never safe in their own homes. As in both England and India centuries later, they had the power of which cloth they would reject. The business was highly profi table but there was little ‘trickle- down’ to those who made the cloth, who might own their looms—though some of these were in hock—but were wholly dependent on the merchants for both wool and dye. These merchants had no commitment to any weaver beyond the job in hand; had the power that goes with arbitrarily cutting off an income. It was an export-oriented business with no interest in domestic consumption and so no desire to pay proper rates for the cloth. The 1280 revolt did break guild power but the merchants became instead more enmeshed with the Count of Flanders and the local aristocracy. In 1360 the authority of his chief offi cer was overthrown. The power of the weavers over the town did not last long, and further revolts took place in 1367, 1370—1 and again in 1377.

Of Gods, Textiles, and Politics | A web of threads and imagination. Trans- parent, it hovers at the threshold of the material. A fragile veil of cotton, also called gauze. Exact origins and history unknown. Presumably it is worn on the head, a utilitarian object whose permeability somehow refers to transcendence. The artful weaving techniques for creating ornamental gauze are considered a special characteristic of Chancay culture, a civilization that flourished on the coast of central Peru from approximately 1200 to 1470 CE. Overtwisted, usually naturally colored cotton yarn is held in place on a frame of structural threads that are later removed. Horizontal and vertical threads cross over each other, form irregular little loops, a series of gaps, absences and presences. Like net, gauze belongs to the class of openwork textiles, and as such the weaving tech- nique itself and its fundamental elements are visible: the movement and texture of weft and warp threads, and the way their regular course is interrupted by the introduction of knotted-in patterns.

A piece of fabric is not an image, but a textured assemblage. When the veils are worn, the figures woven into them are barely visible. They are simply present in an imperceptible way. They accompany the wearer, cover her head and hair. It takes an appropriate background to make a legible pattern emerge. In the top and bottom rows, the contours of figures emerge that are reminiscent of the central figure in Chancay textile art: a deity with human-like features, depicted from the front, in a proud posture, legs wide apart, arms raised up, with a crescent-shaped headdress. The figure is accompanied by a number of small animal-like beings in anthropomorphic postures. The identity and names of the divine beings cannot be determined precisely, and yet they clearly belong to the Andean vision of the cosmos and the Andean representational scheme. Claws and fangs stitched in after completion incorporate the supernatural attributes of the feline deity that already appears on the earliest textiles of ancient Peru. Even though they do not touch each other, the figures are penetrated by the same plant fibers and lines, clawing into the fabric that they seem to be bringing into being with their presence. Their expressions are defined by the same features and postures that typify them as hybrid beings—various degrees removed in their similarity with the other extreme of divine, human, or animal nature. Abstract forms float between them—triangles pointing upward and sickles pointing downward. Structure and decor, space and figures form a unit, and yet the matrix of the thread grid predominates: the image of an animistic cosmos in which the worlds of material and spirit, profane and sacred are joined by the gossamer thread of delicate fibers.

Who created these textiles, and for what purpose? How much creative freedom did they have in the process of making them? The weavers from Chancay mastered nearly every technique known at the time, and yet the iconography of their textiles is astonishingly repetitive. For centuries, certain religious motifs, images of the same divine figures and animals, were replicated over and over. This fact gives rise to speculations about the extent that in this culture, too, as in the case of the Incas, the weaving of textiles and the symbols woven into them were defined by a priestly bureaucracy and used for government-determined purposes.

Around 1000 to 800 BCE, writes anthropologist Prada Ramírez, “a string of circumstances evolved in the Andes along with the development of the loom (…) that allowed for the production of difficult patterns and the transmission of complex iconographies.” This put an ideographical means of communication into the hands of the ruling priestly class, making it possible to transcend the physical realm and its concomitant requirement for an oral tradition and thus extend their power into distant regions. Prada Ramírez underscores that the same period around 1000 BCE, cited by archeologists as the time when woven textiles first emerged, was the moment when the first “imperial” cultures like the Chavín, Moche, Tiahuanaco, and Huari appeared. These are the cultures that historians associate with the birth of government in the Andes.

A hole gapes in the woven bodies on the upper left—a tiny tear in the thread, a stretched loop—creating the impression that you could look into the heart or stomach of the deities. The tale of the fabric, the access it might provide to history and its subjects, remains opaque. What is left is a web, the stylistic construct of that dominant cultural technique of weaving that not only speaks of a vanished culture and its myths, but that in and of itself was the material- ized form of a myth that bound together the earthly and the supernatural, the individual and the government body.