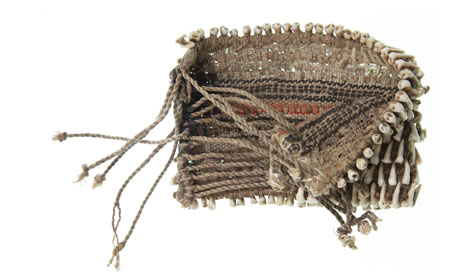 Camouflage | A chameleon: “Its master put it down on a tartan rug and it died of over-exertion”.

In Tinnis, near Port Said, Egypt, famous throughout the Islamic world for its fabrics one of its special products made between the 7th and 11th centuries was bukakalum. It was a cloth that constantly changed colour and was used for saddle cloths and covering the royal litter. Its name derived from abu-kalamun, the chamaeleon.

French soldiers wore red trousers well into World War I. In a parliamentary debate before the War it had been deemed un-French and cowardly to make any change. The many thousands of dead and dying soldiers in the mud and trenches of that war fi nally persuaded them that such honour was of no use to the dead. The blue uniforms of Prussia had changed to ‘fi eldgrey‘ before the war, and the British had adopted khaki. Up to and during the 2nd World War camoufl age patterns emerged. Germany was ahead of the game with uniforms of Leaf, Swamp, Oak Leaf and Pea Patterns. The British employed the artist Roland Penrose and the stage magician Jasper Maskelyne in their Camoufl age centre and introduced the Airborne Smock Denison Camofl age in 1942, while the USA whose uniform had changed in every war from the 18th century Revolutionary the First World War started to use “frog skin/leopard spot“ patterning with the Leopard Spot still in use for the Bay of Pigs fi asco when, in 1961, an invasion of independent Cuba was easily repelled. Since then a ‘lizard pattern‘ was developed for French troops in which two overlapping prints—usually green and brown—printed with gaps to allow for a 3rd colour, a lighter green or khaki; the British made Disruptive Pattern Material, and now Multi-Terrain Pattern standard issue. Contemporary development is focused on Digital camoufl age using micro-patterns as being less detectable than larger blocks of colour.

When they try to catch a chameleon / under the mat, / the chameleon takes the colour of the mat / and they can´t tell which is which. / When they try to catch a crocodile / the crocodile takes the colour of the water and they can´t distinguish him from the current. / When the Wizard tries to catch me / May I take on the agility of the wind / And escape with a puff!

1831 | The silk weavers of Lyons, France—the canuts—begin a cycle of insurrections prompted by a drastic cut in the prices they got from the cloth merchants, ‘capitalists without factories’. They were independent, owning and using Jacquard looms, which “had not automated the physical labour of weaving, but of implementing a design” made by the weavers themselves, but were dependent for material and sales on the merchants. The business had been enthusiastically supported by Napoleon Bonaparte, and Lyon was well on the way to replacing Italy as the Number One producer of woven silks. However, in October, in a situation of falling demand, and falling prices, the weavers succeeded in establishing a fi xed price for their woven cloth with the prefect of the Rhône Department, and a body to oversee its implementation. The merchants however rejected this fi xed rate claiming—in the language of neoliberalism—that it went against laws, which enshrined non-intervention by the state in economic matters, and they made this rejection public on the 10th November. On the 21st the weavers retaliated, taking police barracks, and raiding the arsenal for weapons. By November 23rd they had control of the whole city. The Parisian government re-took control without bloodshed in December, and abolished the fi xed rate. Describing the weavers and their work in 1832 to a British Parliamentary Committee, John Bowring said, “I was exceedingly surprised at fi nding among the weavers themselves and among their children, an attention devoted to everything that was in any way connected with beauty, either in arrangement or in colour. I have, again and again, seen weavers walking about gathering fl owers, arranging them in the most attractive shapes.” In 1834 the clothiers again decided to cut what they paid the weavers despite a renewal of demand—“the orders from the Americas are immense”— who responded with strikes. Their leaders were arrested and as their trial was about to begin the weavers, faced also with more repressive laws, fought the army and took control of the city. The state responded by isolating and then attacking it militarily—tactics later used against the Paris Commune—leading to many deaths and, in the 1836 trials, 10,000 weavers were condemned to deportation or heavy prison sentences. The truly capitalist business is then set to begin, and beauty made a controlled specialization.

Like Teeth in Teeth (22610) in reference to Tom Tylers reading of Georges Batailles understanding of animality as “water in water”.

1. Monkeys have been known as clownish, speedy animals since the Western Middle Ages. When the motorized beasts of the modern day took off—their gait regulated through switches of iron teeth and zags—two German expressions melded into a term for murderous speed: With “einen Affenzahn zulegen” (literally to “put on an ape’s tooth”) the ape’s velocity and the act of shifting gears in an automobile or pursuit plane merged to form the English equivalent of “hitting breakneck speed.” In Bahrain, this “ape’s tooth” was moistened with the blood of regime-critical protesters. And: Territories laboriously wrested from the indigenous population in the southern United States should make way for motorized animals—ape’s teeth versus the ape’s tooth.

2. What does it mean to give the critique of ideology over to the gnawing criti- cism of animal teeth? For Marx and Engels, it meant evading a public reckoning with their former, philosophical conscience and leaving it over to nature’s pro- cesses of decay. In vain: the reckoning came anyway, infinitely far away and in an altogether different time, but one that itself felt intimately bound to it. Animal teeth, transpositions, and abandoned theory experience their real birth in the post-present.

3. How to undermine the architecture of the present, to plunge mole tunnels through the colonial character of the notion of contemporality, a contemporality that speaks of human beings who live at the same time, yet are assigned another one? As Brecht put it: the shark, he has teeth, and he wears them in his face. To refuse the meat of this rotting present and fight for the seemingly utopian: the Bengal tiger as a vegetarian.

4. An ape’s report to the academy: In the literature of the Moderns, animals are our ontology—they are vivid, graphic description of the irreducible, undivided and eidetic world of the “other”, a world that has been drawn into and pervaded by our own. In the many contemporary Sistine Chapels where animals have replaced God on the ceiling, the desire for contact stubbornly persists.

5. Showing your teeth: The “West“ versus the nuclear program of the peacock’s eye, the peacock’s eye versus the nationalities in its own territory and versus the entire region and its biters. Who wants to deny to the Other the adornment of teeth that he himself had put in, row by row? Because the wrong person could be bitten, or because the ability to bite precaritizes the monopoly on biting?

6. The idea of the city as protection from wild animals—in the urban planning concept of the linear city, human beings are to be protected from human beings. If a person’s neck has all the charm of a border town, then the band of apes is a meeting of both mimesis and alterity, but also culture and nature, technology and mortality, colonialism and anti-colonialism—and cultural pessimism and “in spite of it all!” Violence is not the bond of all things: The promise is a slip of the tongue.